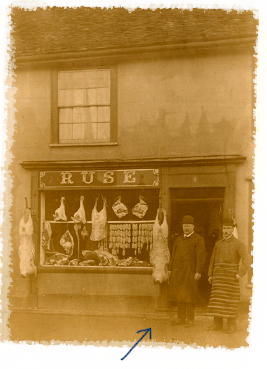 A bit gruesome but that’s how it was!

The first talk of the winter season was on 26 September and pretty well attended it was too. The speaker was Henry Ruse, one of the famous Ruse family of butchers who own a shop in Long Melford on the same site as the first one 150 years ago. Indeed, the business is thought to be the oldest family-run food shop in Suffolk.

Most people will be familiar with the shop which has changed considerably since it opened in 1860 by Henry’s great-great grandfather, Teverson Ruse, who with his billycock hat, long apron and cleaver looks like a character out of a Dickens’ novel!

Next in line in 1878, was Teverson’s son, Henry, not a butcher at all but a draper, and a rather dapper one at that and, in all honesty, butchery wasn’t his forte. His apprentice, Jonas Ambrose, took over the reins in the 1920s until the next generation, Freddy, was old enough to do so in 1939 – a time of rationing during the war and all that that entailed with Min of Ag and Min of Food regulations – not to mention the black market….

In 1966 Henry, Freddy’s son and our speaker tonight, took over. Now the business has been run by his son, Oliver, since 2007.

Henry brought in some ‘butchery antiques’: wooden pulleys and massive hooks and chains for hauling up carcases, pigskin scrapers, fleams and bloodsticks for bleeding calves so their meat would be pale and devoid of blood. Pigs were conscious when their throats were cut – now they are electrically stunned and unconscious when killed.

In the past, cattle were driven through the streets to slaughter. Things did not always go according to plan such as the day two bullocks decided to go into a shop and had difficulty turning round to come out again…  Meat was delivered to customers by pony and cart – not great on a hot summer’s day. And meat was a rare luxury for the less well off.

Unusually for butchers’ shops these days, there is an abattoir at the back of the Long Melford premises which, of course, adheres to the strict animal welfare and hygiene laws today – thank goodness!

These days customers do not want fatty meat, suet, liver, offal – they want it all nicely cut up and ‘sanitised’ in sausages and burgers. I was struck by just how much of an animal is wasted these days. In the past, they used every bit of it for something. Even so, can’t say I relish the thought of tripe and cow heel…